Inside the Spring Fire 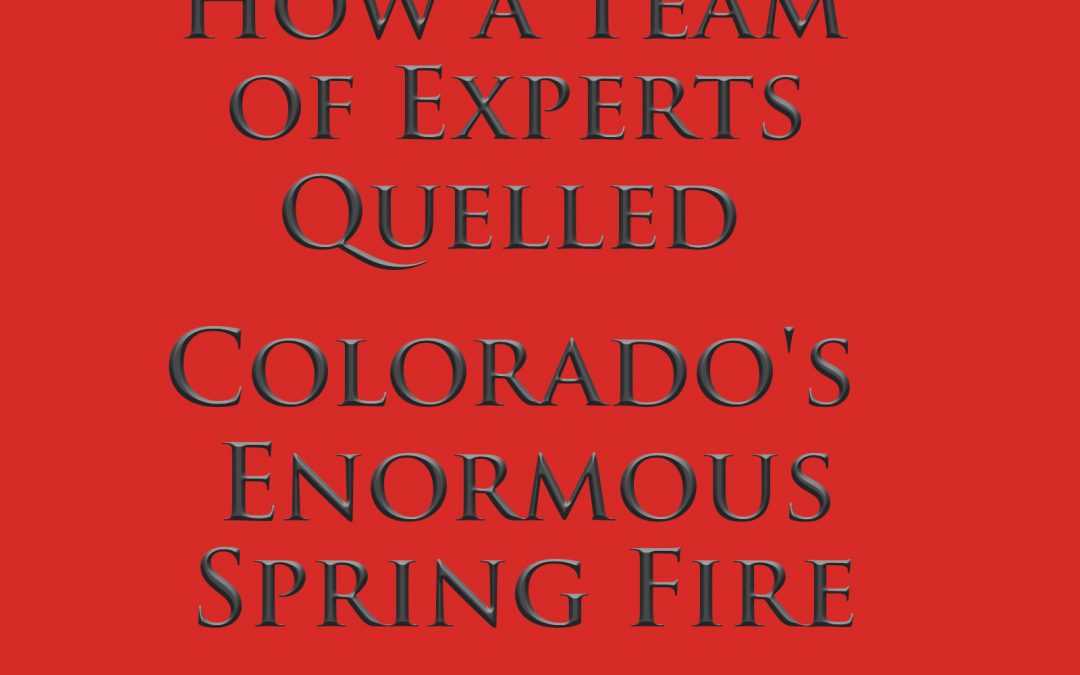 This story by Sarah Scoles appeared in the July 20 edition of Wired magazine. Shared with permission.

I first heard about Colorado’s Spring Fire on July 1, when I was driving back from a camping trip. My mom texted me from her home in Florida: “How close are these fires?” I pulled over to a rest stop, called up the federal disaster website Inciweb, and sent her back a screenshot of the wildfire’s perimeter. It seemed far away from my house on the Huerfano County line, like it would have to cross impossible acres to even come close. “Looks like we’re good,” I wrote back.

The Spring Fire is the third largest in the state’s history. By the time I learned about it, the fire already had burned through more than 40,000 acres. A plume of smoke unfurled into a constantly replenished mushroom cloud. It was 0 percent “contained,” meaning that no human-made or natural barrier was stopping the fire’s edge from expanding. Costilla and Huerfano counties had evacuated around 2,000 households by July 2.

I arrived at my cabin on the 3rd, hose in hand, knowing I couldn’t really help the house but not knowing what else to do. The Spring Fire had bloomed to nearly 80,000 acres. The Transportation Department closed the highway right at the turnoff to my place. Big-bellied planes full of retardant crossed the sky overhead, their flight path traversing part of the bullishly named Wet Valley.

That night, the sunset, reflecting off the smoke particles, was spectacular. The mountains all looked like they were on fire—even the ones that weren’t.

Forty miles south, from their base in the Huerfano county seat of Walsenburg, a group called Rocky Mountain Incident Management Blue Team had taken charge of taming and containing the northern section of the blaze; another team, Rocky Mountain Area Incident Management Team Black, was assigned to deal with the southern portion. To direct the emergency response personnel—nearly 1,800 people worked the fire at its peak—the group needed a lot of data, a tightly wound plan, and a weirdly Office Space organizational structure.Fire behavior analyst Shelly Crook, Blue Team, is key to that endeavor. She’s in charge of figuring out what the northern portion of the fire is doing and what it will do. Every morning during the Spring Fire, she has woken up in the bed she keeps in the back of her car. By 5 am, she shows up at the ad hoc incident command post—at John Mall High School—to see if an infrared plane went out overnight. “I take stock of that data, and see where the fire moved from the previous perimeter, to see how much it has grown,” she says.This is Crook’s fourth fire this year, and when we spoke, it was her 60th day in the field. (She is “retired.”) “When a fire starts, you kind of drop everything,” she says. And so did the other Western-based members of her team, who converged quickly on the Spring Fire after the call went out from the Geographic Area Coordination Center, which helps mobilize emergency resources.

At their temporary command post in Walsenburg, they have all the divisions a business might, including finance types, HR reps, and porta-potty procurers. Every day, a planning team writes out a 30-page packet of information about everything a firefighter might need, from which frequencies to use for communications to what the weather will be like.

For that latter part, there’s a dedicated meteorologist. He sits next to Crook as part of a unit that prints more than 150 maps every day—county roads and structures, topography from the US Geological Survey, GPS locations from the ground. After Crook checks on the infrared flight, she gets information from her officemate about the relative humidity; she’s hoping that it increased significantly overnight. “If it’s good, the fire is not going to be active as early,” she adds. They dig into data from weather stations—permanent ones and seven RAWS, remote automated weather systems, specially installed at critical Spring Fire locations—informing a forecast Crook will present during morning meetings.

That’s just the beginning of Crook’s day, which she dedicates to predicting the north fire’s next moves, as best she can.

That kind of information eventually makes its way to the community—via in-person meetings and daily one-sheets. The public document released on the Fourth of July waffled in its optimism. “Overnight, calmer winds and lighter fuels slowed fire growth along the south and east flanks of the North Spring Fire,” it says. “Fire activity increased along the northwest flank near Sheep Mountain as it moved into dry, mixed timber.”By the afternoon, data from an infrared flight revealed the fire’s total extent to be 95,739 acres. The pre-evacuation zone, shown on a Google map, now stretched to two miles from my house. To the south, the view from the porch had morphed into a wall of smoke. I did the things on a preevacuation checklist, just in case: take down curtains, close and unlock windows, turn off the gas, turn on the lights, bring everything in off the porch. I used the hose to fill buckets with water and place them around the house. I didn’t need to (pre-pre-evacuation is just nonevacuation), but my nerves had history: When I was 12, a Florida wildfire destroyed 30 structures in my rural area, and my family didn’t get out in time. On our path down the highway, the road was blocked by fire, and we spent hours in a landfill entryway, surrounded by flames.There are concrete steps individual citizens can take to become more firewise in general: Get the gunk out of gutters, clear defensible no-brush space around your house, keep wood piles and propane a few dozen feet away, screen all openings so embers don’t sneak in. But sometimes, despite best efforts, Mother Nature wields an upper hand. By this point in the fire, on the Fourth, more than 100 homes had been lost.

At 6 p.m., I tuned in to the community briefing, streamed via Facebook Live from the small town of La Veta.

“Happy Fourth of July, everybody,” says David Detray, fire chief of the La Veta area. “I want to give you this picture of your La Veta Fire Protection District personnel.” On the screen behind him, eight firefighters, two holding American flags and one holding a giant teddy bear, stood in a V, seemingly paused in a march through an otherwise empty street.

This picture was from the main street in Cuchara, an 8,500-foot-high village that had been evacuated. Citizens couldn’t hold their annual Independence Day parade, which they’ve done for some 50 years. So the firefighters took a moment to stage a miniature, kind of morbid one for them.

“These are your people,” Detray declares.

In the Blue Team’s update, operations section chief Chris Zoller notes where the fire had been “pushing,” expanding its edge by 6,000 to 7,000 acres. He moves on to an area, full of trees, where the fire would soon hit a road and move into a region called “Paradise Acres.” “This is going to be our trouble area for the next 24 hours,” he says.

After presenting her initial forecast at Rocky Mountain Incident Management Blue Team morning meetings, Crook goes right back into prediction mode. She feeds information into models that forecast the fire’s behavior, part of the Wildland Fire Decision Support System—a powerful tool that gobbles up data from multiple sources to support wildfire strategy making. Some of the information it sucks in comes from a federal program called Landfire, which can help firefighters tell what is growing on the affected ground, how it burns, and how topography flows beneath it.Although the support system itself is much newer, these federal prediction models have been in development for around 30 years. “They’ve morphed and become more robust,” according to Crook. She has two favorites: the three-day perimeter projection, and the fire spread probability prediction. “It tells me over the course of the next seven to 14 days what is the probability of the fire impacting any point on the landscape,” she says.But simulations can only simulate. So in the afternoon, Crook heads out with the firefighters and comes back with ground truth. She can feed specific information back into the models—essentially calibrating them to the north Spring Fire. Still, it’s not a perfect system. “There’s a bit of a mystery on every fire,” Crook adds.

There’s also a bit of logistical challenge: not just where to put the porta-potties, but also how to get the humans and heavy equipment you need. When the Spring Fire started and Rocky Mountain Incident Management Blue Team showed up on the scene, the fire was already moving fast. They needed to act. But the rest of the state also seemed to be on fire. “It took like four days before I was able to get the resources to even come close to what we needed to help start suppressing the fire,” says Jay Esperance, the Blue Team’s incident commander.

But that, he notes, is life. “There’s only so many firefighters and equipment, and we were the new show in town.”

Once the heavy machinery did arrive, it was substantial. At one point, there were 17 bulldozers to clear out lines of land to contain the blaze, two “masticators” to chew up brush and other small-diameter stuff, and skidders to move logs.

In addition to ground-bound resources, the Spring Fire fighters also took to the sky. They used planes and helicopters, although Zoller calls them “fixed-wing” and “rotor-wing” aircraft. The planes that combated this blaze—stashed in fire-prone regions across the country during the volatile season—included single-engine flyers and VLATs, Very Large Air Tankers. Both carried fire retardant that spilled from their bellies like paintball powder. The helicopters took care of the H-2-O. “Water is for the immediate need to cool things down,” says Zoller. Retardant, meanwhile, slows the fire down.

Above the winged craft flies an “eye in the sky”: an in-the-air air-traffic controller. “He directs all the traffic, and keeps the rotor-wing out of the way of the fixed-wing,” explains Zoller.

Because the last thing anyone needs during a wildfire is a plane crash.

At a July 11 evacuee meeting in Fort Garland, which once hosted a functional military fort, a southern-section public information officer took the stage. “We’re going to start off with some good news,” she says. The entire fire was 83 percent contained, and the southern perimeter was entirely under control. Team Black was going home.Crook’s Blue Team took over the whole operation, which, two days later, was 91 percent contained. The northern edge of the fire stayed far enough from my house that I never had to evacuate, and the Blue Team soon packed up, leaving operations to local teams on July 16. On their way out of town, they decontaminated their equipment to avoid transporting invasive species, “weed-washing” the outside with high-pressure hoses, and burning the insides of tanks with 140-degree water.The path to recovery will be long and hard, like the roads that climb up through the high mountain passes here. According to the Denver Post, the area has brought in the disaster cleanup nonprofit Team Rubicon to help, and a group called the Voluntary Organizations Active in Disaster will assist too. More than 225 structures were destroyed, according to a July 18 report from the National Interagency Coordination Center. What was forest is charred trunks, scorched earth.

No matter how much data anyone or any satellites take, it’s impossible to predict exactly what will happen next for the communities. But if one of Crook’s models could provide post-fire forecasts, it would probably say that life will slowly grow back toward normal.