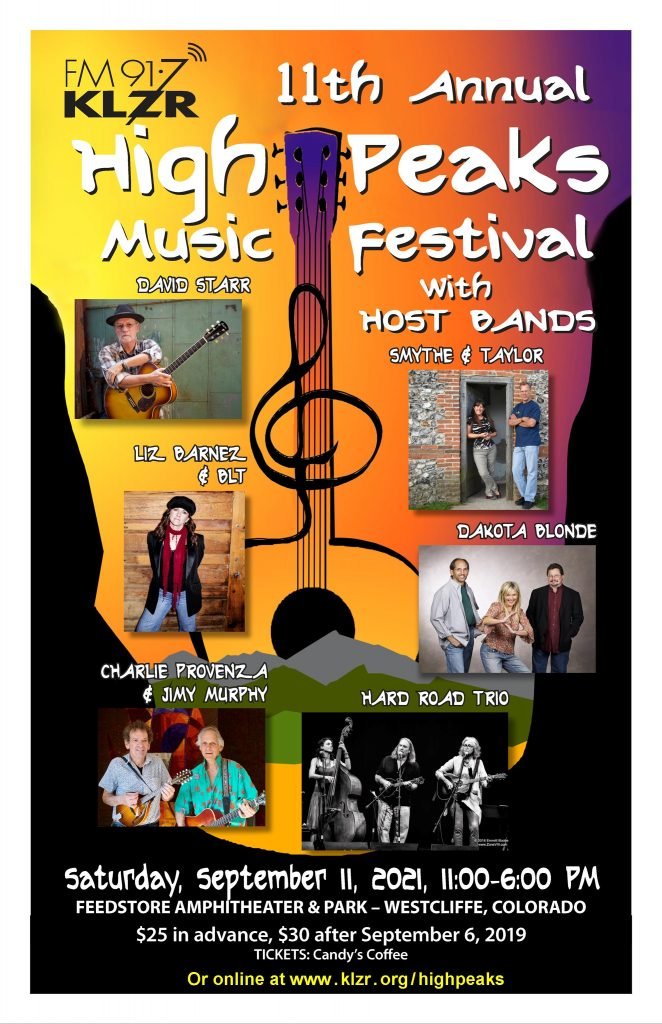 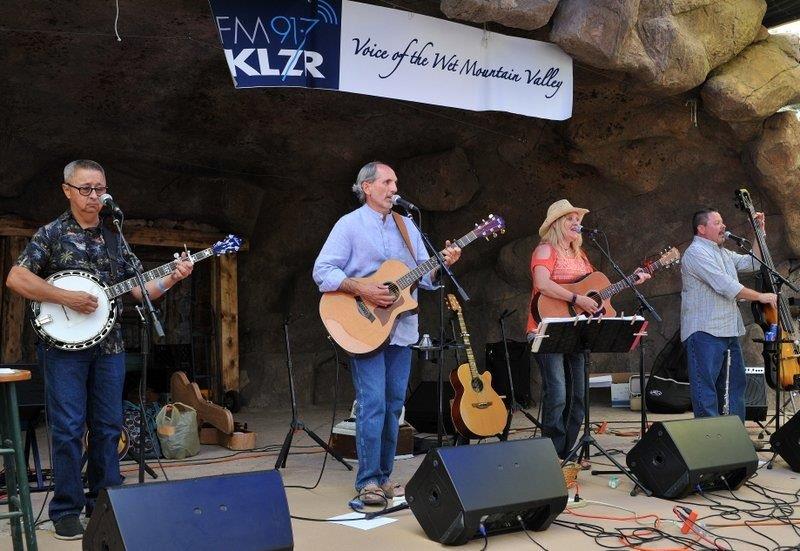 The 11th Annual High Peaks Music Festival will once again bring first-rate, acoustic and Americana music to the valley!  Join your friends and neighbors from near and far at the beautiful Silver West Feedstore Amphitheater Park for a great day of music.  There will be shade, but please bring hats, sunscreen, and lawn chairs.

Scheduled to appear are the Hard Road Trio, folk and bluegrass from New Mexico, Liz Barnez and BLT who wowed ‘em at Summer in the Park, renowned mandolin and guitar virtuoso Charlie Provenza with Jimy Murphy, and singer/songwriter David Starr, both new to the valley.  And it wouldn’t be a High Peaks festival without host bands Dakota Blonde and Smythe and Taylor to round out this memorable day of music!   The music will run from 11:00 AM to 6:00 PM.  Butch Hause will once again be skillfully riding the soundboard.  The Silver West Feed Store will have food and drinks available.  Gates open at 10:30.

Tickets are $25 in advance and $30 the day of the show and are available at Candy’s Coffee and online at www.klzr.org

Here is this year’s lineup …

David Starr possesses “a compelling voice, something truly special, both accessible and passionate” (Elmore), that has been honed releasing nine albums, touring internationally, and opening shows for esteemed artists such as John Oates (Hall & Oates), Karla Bonoff, The Steel Wheels, Survivor, and more.

Liz Barnez returns with Bonnie Sims and Taylor Simms … BLT! Liz Barnez was born in New Orleans, Louisiana and grew up inspired by jazz, blues, folk, gospel, R&B, Dixieland, funk, and parade music. She embraced the diversity of her musical and creative upbringing and transformed those into her own eclectic style of music.

​Inducted into the Colorado Music Hall of Fame as a member of the Mother Folkers (the most carefully pronounced name in show business)in 2019.  The Mother Folkers is a group of women musicians who began in the 1970’s  with original members Mary Flower, Mary Stribling, Kathi DeFrancis, and Eileen Niehouse.  Over the years the members have included Mollie O’Brien, Carla Skiaky, and Vicki Taylor to name a few.  Liz joined the group in the early 1990’s.

A one time National Mandolin Champion and Six time Telluride Mandolin Contest Winner, Charlie has performed with the Aspen Music Festival, The Colorado Symphony, the  Wild Jimbos and his own groups.  Featured Author in Mel Bays Publications Mandolin 2000 and Winfield Winners.

Composed and confident, Jimy Murphy is able to recite facts and stories that began long before his birth. Tales of how his mother moved with her father from the Oklahoma Dust Bowl to Evergreen in 1934 literally set the stage for the events that molded Jimy into the mesmerizing character he is today.

Smythe and Taylor returns as festival co host. ‘S&T’ have become well known for their symbiotic harmonies, comedic timing, excellent sound quality, and their unique “3D” style of guitar playing. After Gary won the Woody Guthrie Songwriting Award, S&T were nominated in 5 categories of the Texas Music Awards. They won the “Popular Cover” and “Vocal Group of the Year” awards.  Since 2009, S&T have hosted the High Peaks Music Festival in Westcliffe, Colorado, and have enjoyed a standing invitation to bookend the Sweet Home Fest in Guildford, England since 2017. S&T have played hundreds of venues but enjoy performing at listening rooms, festivals, and house concerts the best.

Dakota Blonde returns as festival co host. Dakota Blonde is one of the most unique acoustic sounds around!  Their combination of original tunes and carefully selected covers, along with their endearing stage presence and humor is out of this world!
Their musical sound is hard to classify, but best put, they are acoustic folk, part bluegrass, part acoustic rock, part singer/songwriter, and sometimes even Celtic!  They are a unique blend of heart, authenticity and contagious spirit!  Their acoustic sound is like no other, with such tightly blended harmonies that you would swear they were born to sing together!

The Hard Road Trio features three distinctive voices blending into an original sound that leads with an undeniable groove and finishes with enchanting harmonies. Based in New Mexico, the Trio has toured the US for over eleven years, appearing at venues like Berkeley’s Freight and Salvage and Swallow Hill in Denver, and festivals including High Mountain Hay Fever and Rice Festival. Their music has won New Mexico Music Awards and has been played on radio stations across the country including Sirius Radio

Advance Tickets now available at Candy’s Coffee on 2nd Street for $25. each.  To purchase will call tickets for pickup day of the show, please choose the appropriate button below. If you need to purchase more than 8 tickets, please use multiple transactions. Tickets will be $30 after Semptember 6..   THANK YOU!